Paul Yule is a photographer and documentary filmmaker based in London. Berwick Universal Pictures is his Production Company (the name comes from his first studio – 32 Berwick Street in Soho). You can buy original Paul Yule photographs and books on this website, and watch his documentary films here too.

Having photographed the early theatre work of Rowan Atkinson, Richard Curtis and others of that generation, in 1979 Yule went to Peru. There then followed The New Incas (1983), a book of his photographs from Peru published by The New Pyramid Press. His first documentary film, Martin Chambi and the Heirs of the Incas (1986), was about the iconic Peruvian photographer and made for the BBC’s Arena strand. Trains That Passed in the Night (1990), for Channel 4, was a film about the great American photographer of steam, O. Winston Link, whose troubled personal story he returned to more than a decade later in The Photographer, His Wife, Her Lover (2005). 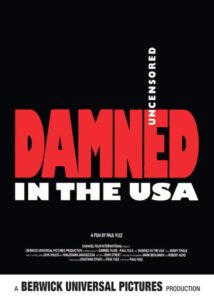 Damned In The USA

Yule’s documentary about censorship and the arts, Damned in the USA, became embroiled in a landmark legal dispute in 1991/2 . The film won the International Emmy for Best Arts Documentary. But then, in an attempt to stop US distribution, Rev. Donald Wildmon of the American Family Association sued Yule, his co-producer Jonathan Stack, and Channel 4 for $8 million. Wildmon described the film as “blasphemous and obscene”. Channel 4 fought the lawsuit in court in Mississippi – and won – but not before Lou Reed had re-written the lyrics to his classic Walk on the Wild Side in support of the case.

Yule made the acclaimed Good Morning Mr. Hitler! in 1993 with Luke Holland. He directed Elgar’s Tenth Muse in 1996, a drama about the composer Sir Edward Elgar starring James Fox and written by Nigel Gearing. In The Footsteps of Bruce Chatwin (1999) was a 2-part biography of the writer made together with Nicholas Shakespeare. In 2008 he completed a three-film 60-year history of apartheid in South Africa and its consequences, partly told through the prism of sport, including The Basil D’Oliveira Conspiracy (2004) with Peter Oborne.

Other award-winning films have included The Last Waterloo Cup, Babitski’s War (in Chechnya), The House of War (in Afghanistan), Mugabe’s Secret Famine (in Zimbabwe), and All Out In Pakistan. He has made two series of Dream School SA in South Africa, and most recently completed The Life of Jo Menell (2019), a portrait of the iconoclastic activist filmmaker.

Throughout, Yule has continued to work as a photographer and photojournalist. A major retrospective of his photographic work, My Developing Eye, was published as a Limited Edition book in 2021.