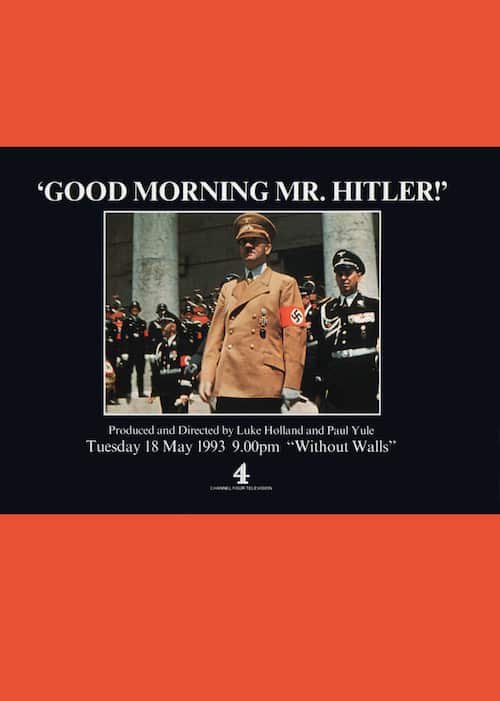 ONE WEEKEND in 1939, amateur cameraman Hans Feierabend recorded a mass celebration and march in Munich in honor of 2,000 years of German culture. The event was attended by Adolph Hitler and many of his followers, including Joseph Goebbels, Heinrich Himmler and Rudolph Hess. Filmmakers Luke Holland and Paul Yule have incorporated Feierabend’s whole-day recording into a documentary called “Good Morning, Mr. Hitler!”

Thus Good Morning Mr Hitler! tells the story of a weekend in Munich in July 1939, six weeks before the outbreak of World War II, when Adolf Hitler and the entire Nazi leadership celebrated their version of German history and culture. Using the extraordinary newly-discovered colour footage, this is a film about the process by which art, together with political patronage and terror, can be used to market a message – any message.

The Story – A Parade of Nazi Art and Culture

Film makers Luke Holland and Paul Yule assembled an audience of elderly Germans, framing them watching themselves in the 1939 footage and reminiscing about their experiences. Among them are sons of the unofficial cameraman who shot the 16-mm film, as well as the daughter of the publisher of Hitler’s Mein Kampf (who in deference to Hitler’s wish for “privacy” on visits to the publisher’s home never said “Heil Mein Führer”, but always “Good Morning Mr. Hitler.”).

There are also interviews with Feierabend’s son, a woman who participated in the parade as a Valkyrie and others – all of whom watch the footage and offer their present-day reactions.

The remarkable footage presents a rarely-seen view of Adolf Hitler relaxed against the background of a city in celebration. It shows the Munich crowds as complicit participants, sharing their leader’s excitement of a parade which is reminiscent of Roman times rather than a modern day state.

This is a really a must see for anyone interested in the subject, particularly as this is not an official Nazi propaganda film but an amateur enthusiast filming an event as it truly happened.

Produced and Directed by LUKE HOLLAND and PAUL YULE

Previous: White Lies Next: Martin Chambi & The Heirs Of The Incas